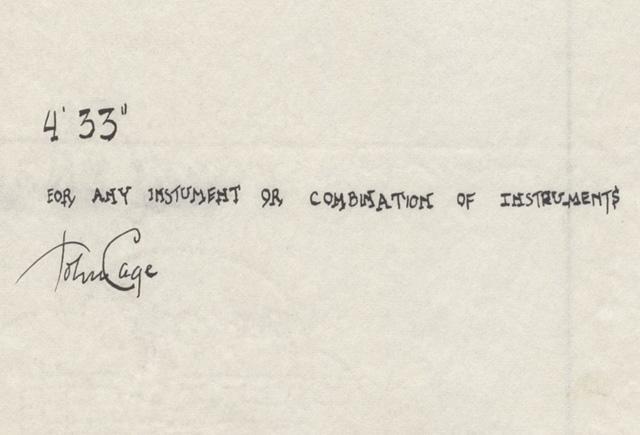 23 musicians representing 23 countries/territories will perform virtually together in a version of 4.33

A call out to Make Music Day country representatives to nominate a musician from thier region.

"4′33″ (pronounced "four minutes, thirty-three seconds" or just "four thirty-three") is a three-movement composition by American experimental composer John Cage (1912–1992). It was composed in 1952, for any instrument or combination of instruments, and the score instructs performers not to play their instruments during the entire duration of the piece throughout the three movements. The piece consists of the sounds of the environment that the listeners hear while it is performed, although it is commonly perceived as "four minutes thirty-three seconds of silence". The title of the piece refers to the total length in minutes and seconds of a given performance, 4′33″ being the total length of the first public performance.

Conceived around 1947–48, 4′33″ became for Cage the epitome of his idea that any sounds may constitute music. It was also a reflection of the influence of Zen Buddhism.

4.33 is not silence - it is a performance piece. The musician is not playing and the music score is blank but ambient environmental sounds still exist.  Here is a version performed by The BBC Symphony Orchestra conducted by Lawrence Foster live at the Barbican.  The person coughing, the person shuffling their feet, etc are part of the performance.

Make Music Day first came to the UK in 2012 and the number of gigs taking place has been growing year on year. 2017 was the first UK-wide coordinated event with support and funding from national organisations resulting in 147 performances. In 2020, there were 1,739 performances live and online.