Ode to Earth was a collaborate project between Beyond Skin, DU Dance NI, and VILLA Leipzig. The aim was to bring young people together in a cultural exchange to create a self-directed creative campaign about climate change incorporating each group’s skills – music, dance, and civic engagement.   Press release 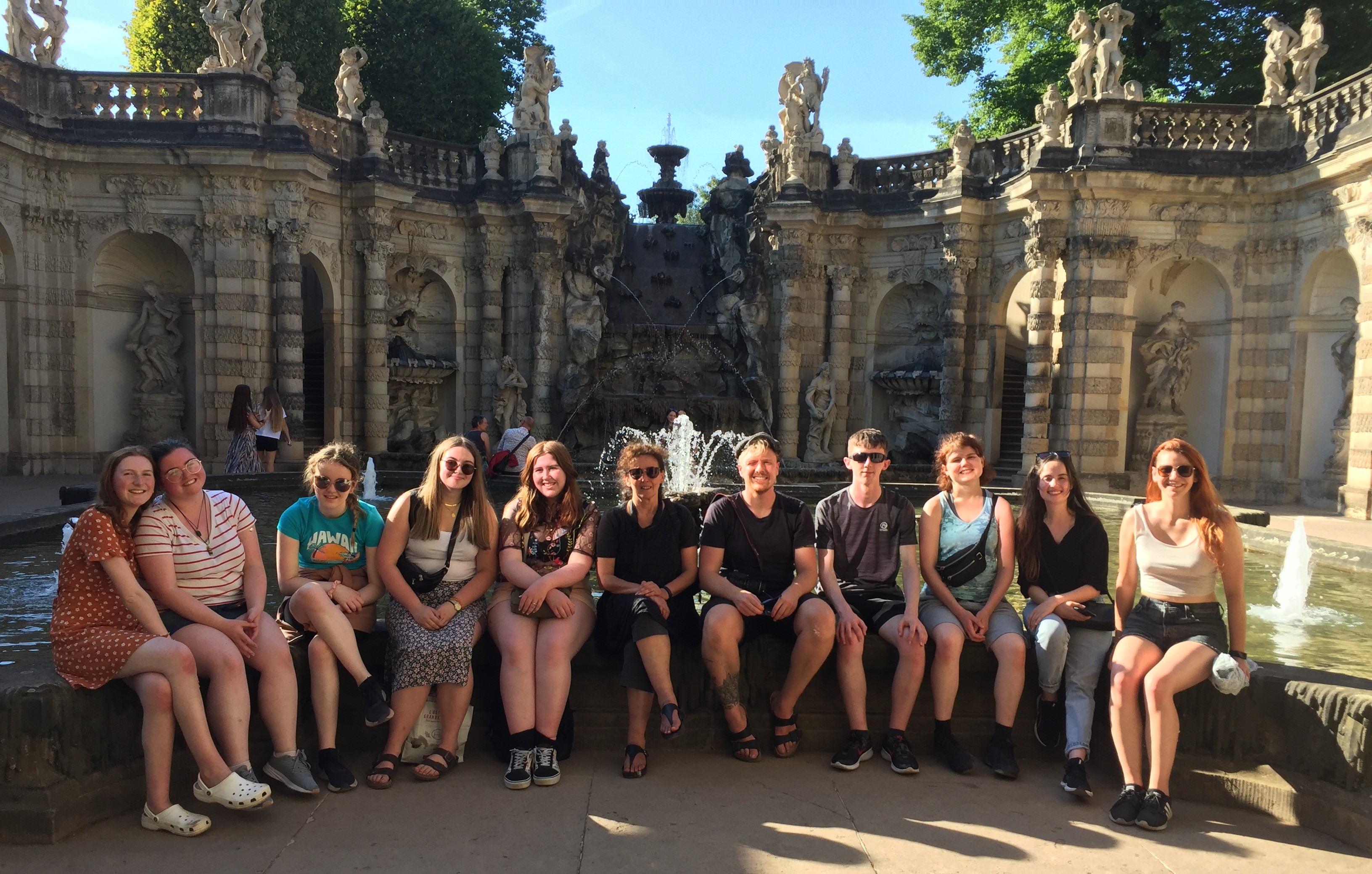 The programme started with a zoom meeting at the beginning of January 2022. Prof. John Barry from Queen’s University Belfast introduced the issue of the climate emergency with an informative and well-pitched talk. The dancers were meeting face to face as part of a Steering Group residency and so they were able to begin the process of creatively exploring the topic and sharing some of their work with those online. A second online meeting happened in February and the topic of fast fashion came up as a possible focus for the programme. 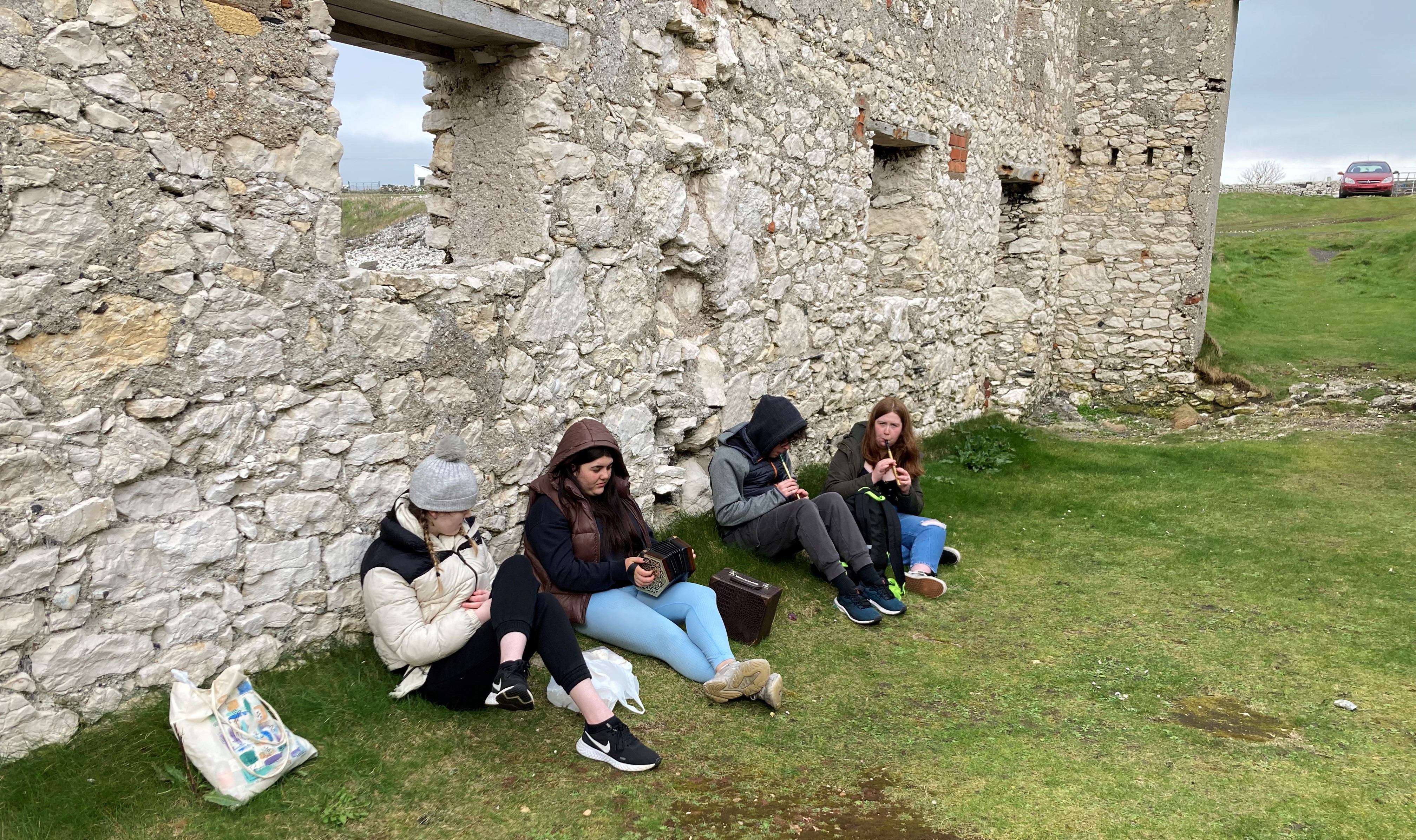 Exchange to NI
In April the groups met face to face for the first time as four young people from VILLA plus their leader travelled overland to Northern Ireland. They were met by the two leaders from Northern Ireland and they stayed overnight in Belfast. The following day they were joined by young people from Beyond Skin and shown around the city before travelling up to the north coast where they were joined by young people from DU Dance. This included a tour of Stormont, as well as various attractions and historically significant sites in Belfast, followed by many naturally beautiful spots along the north coast. The following three days
were spent in Corrymeela in Ballycastle. Corrymeela is a centre set up specifically to facilitate cross-community exchange. It was the perfect place to begin working together as all practical daily living requirements were provided, leaving the group free to explore and create. Evening walks on the beach, morning reflections, a lot of brainstorming and the creation of visual posters and artwork, saw the group making three short films 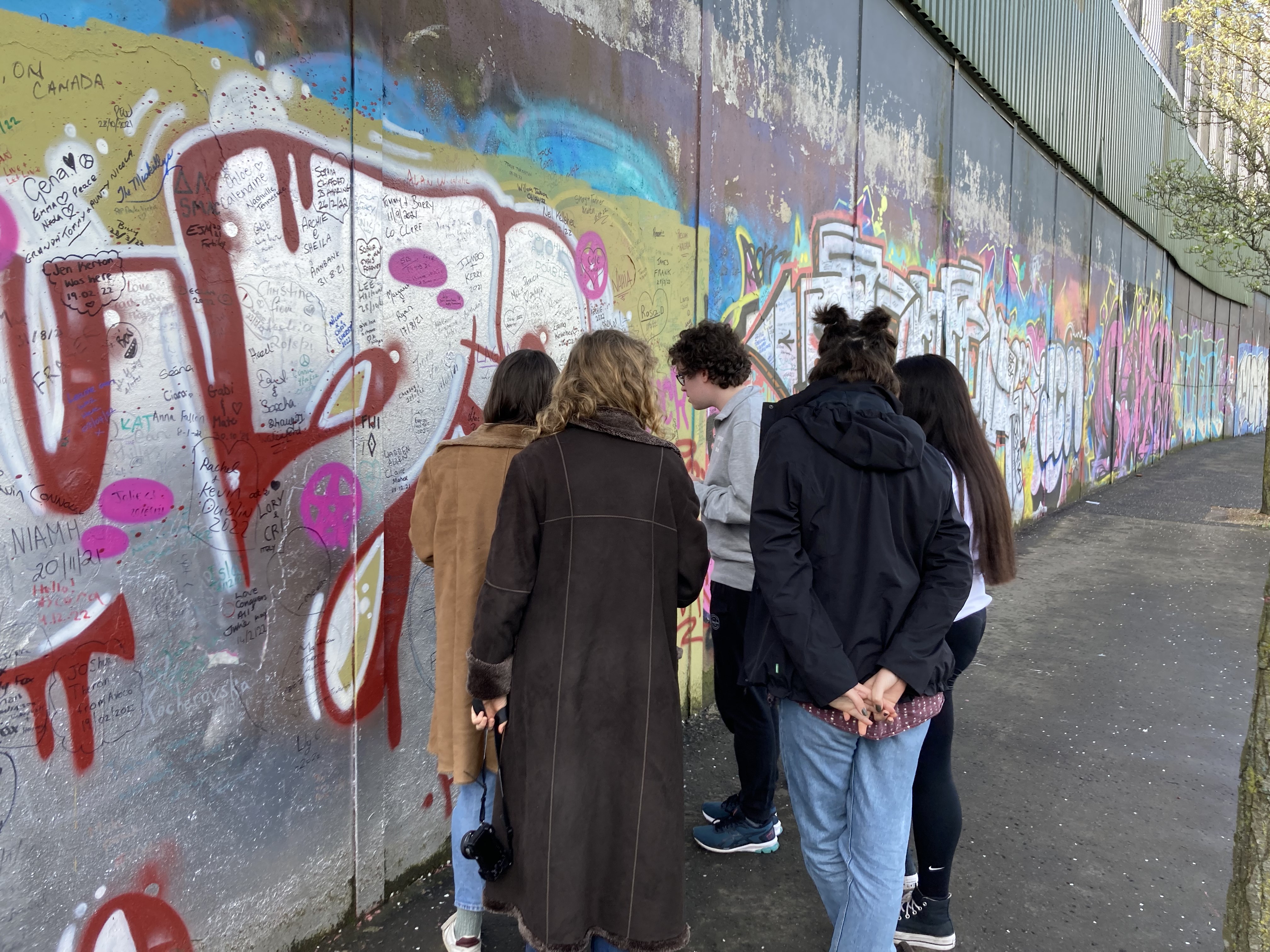 The focus of the project veered away from ‘fast fashion’ and organically moved to ‘our cultural relationships to the environment.’ As part of the process the group went into the town of Ballycastle to listen to traditional Irish music, record the street sounds and interview local people about what they think of the environmental crisis. The films were shared and
discussed and future work planned. We also visited Rathlin Island and created, danced, sang, and played music while exploring the unique ecosystem there, before returning to Belfast. The group from VILLA travelled to and from Northern Ireland by land and sea, making a long, but eco-friendly journey. 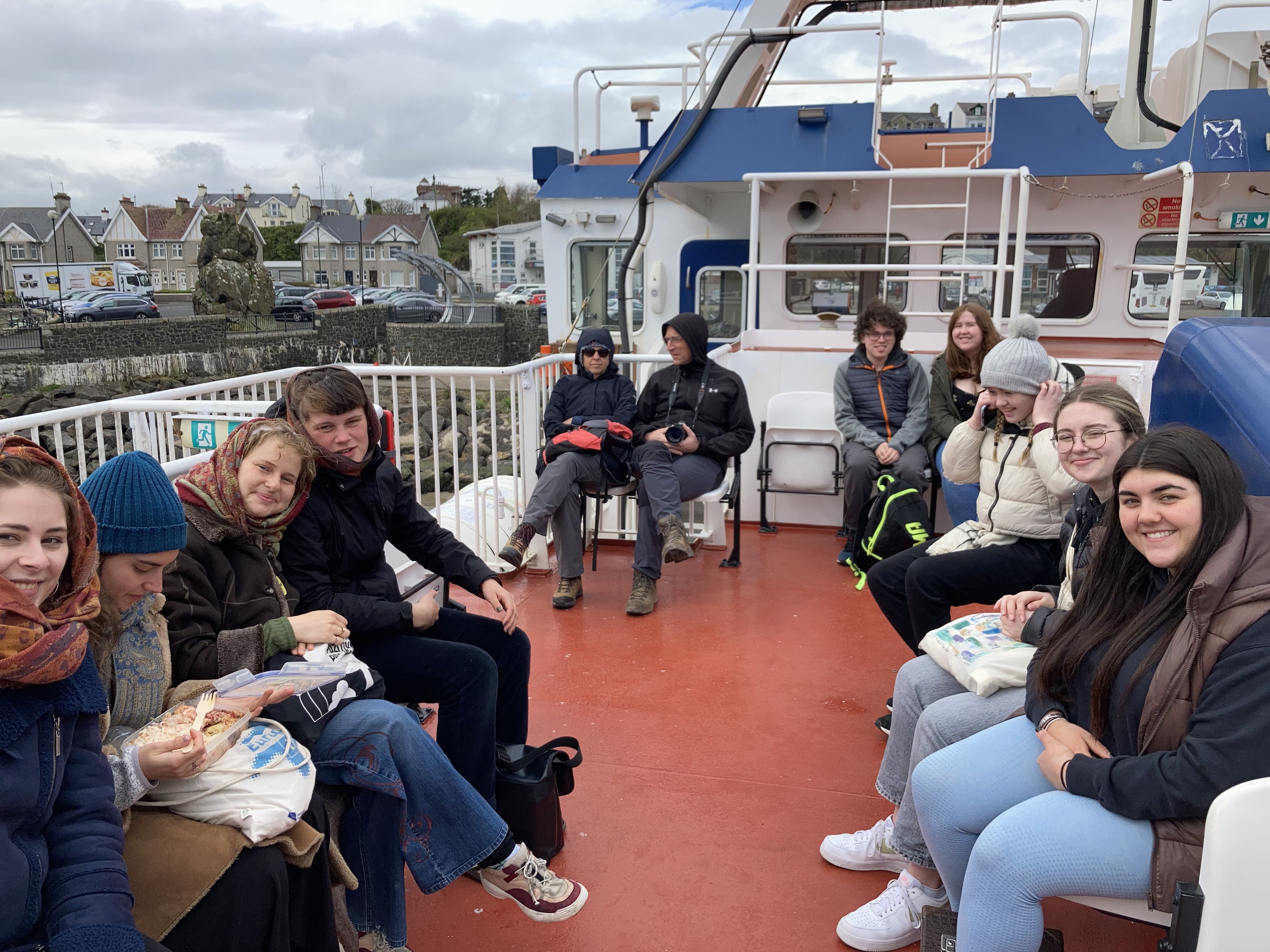 A further zoom session took place early in June to keep the groups connected and the ideas fresh. As some of the young people from Northern Ireland joined the project at this stage, before travelling to Leipzig the group met and worked together for a day in early July. 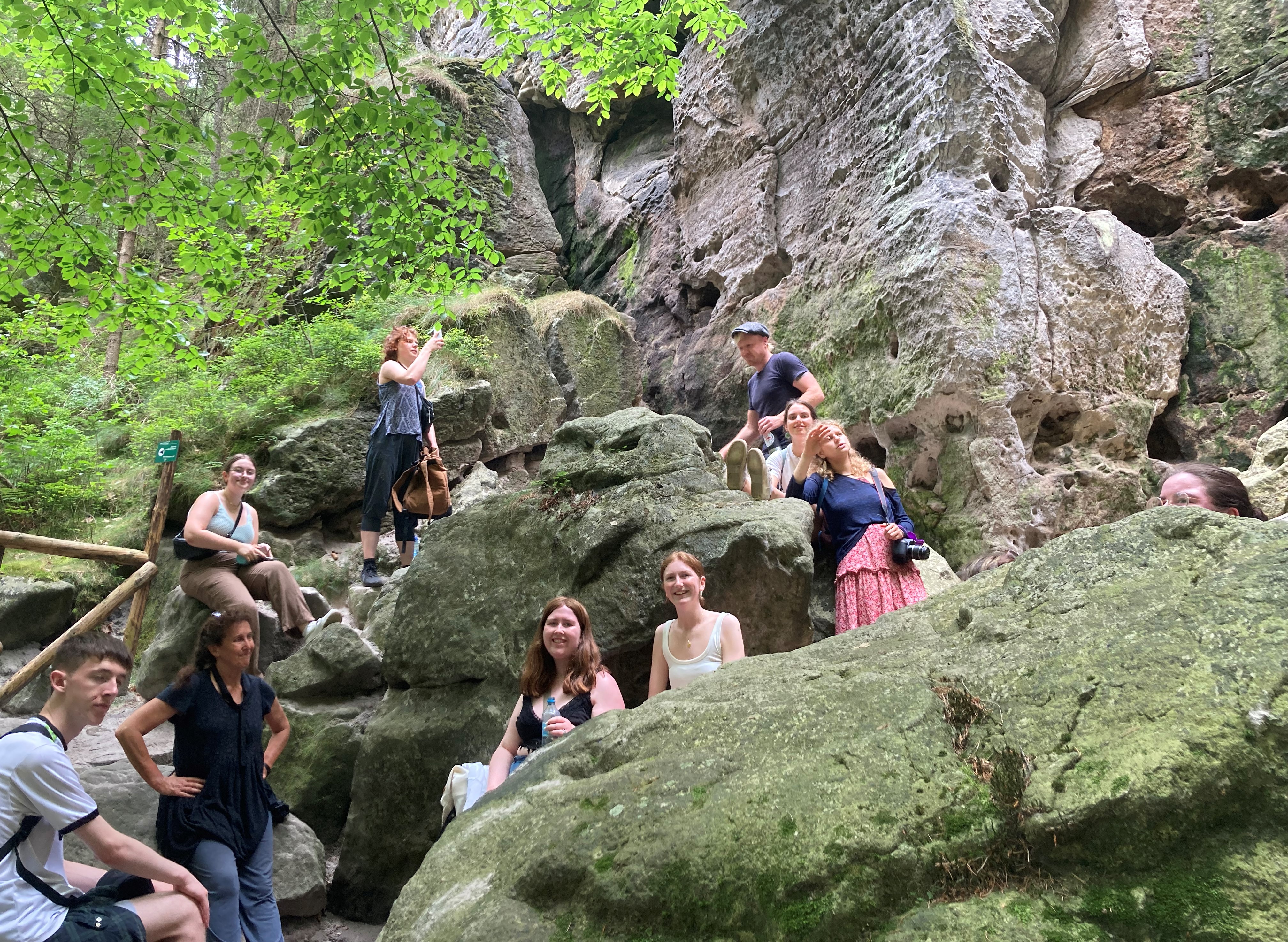 Exchange to Leipzig
On 20th July a group of nine young people plus two leaders travelled from Northern Ireland to Germany. The group flew into Berlin and travelled on by train to Leipzig where they were met by the VILLA group leader. After reacquainting with the young people from Leipzig the next morning and working in the studio creating dance and music sequences and sharing ideas, the group split into three creative teams. The young people would all work together to create videos, but each creative team took control of a section of filming, deciding on the content of their section, what it would be about, how it would look, and where it would be filmed. The next four days were full of city tours and beautiful mountain walks, all the time filming and creating visual and audio images. We made three videos, centred around a wish at a wishing tree – first, a wish for better balance between us and our environment; second, for people to appreciate the earth and the nature around them; and third, for us all to protect and nurture our home. The videos will be released soon! 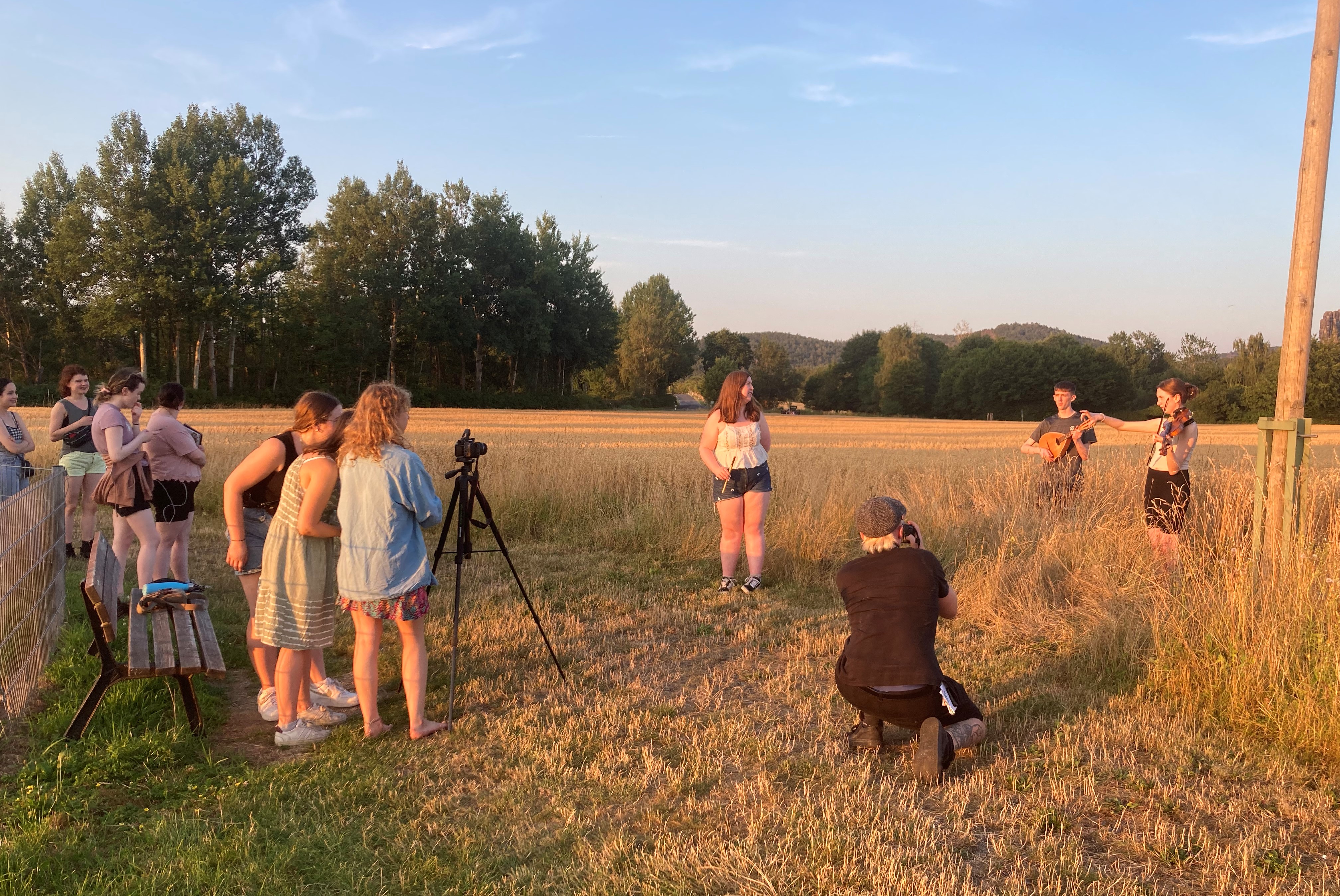 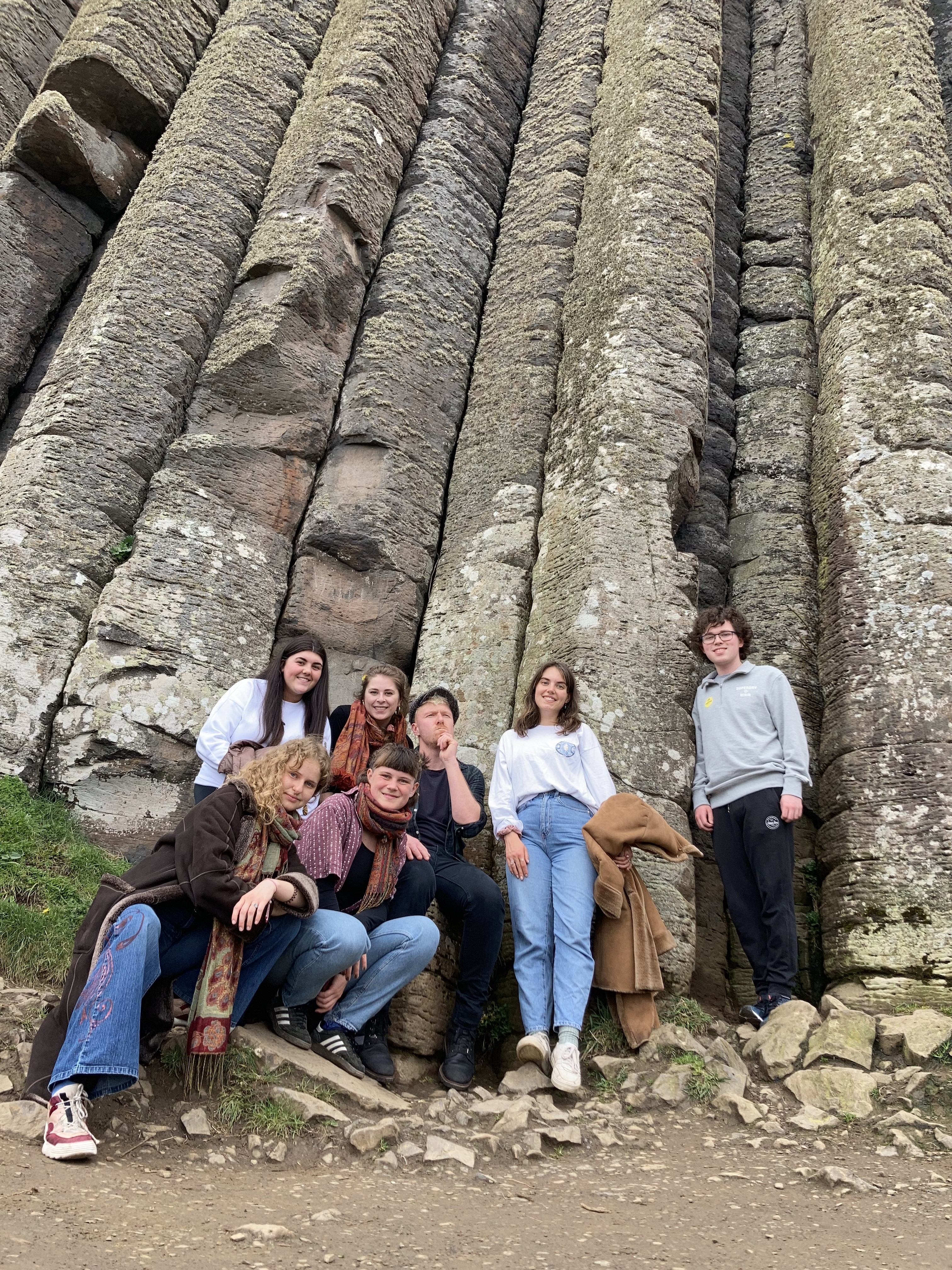 Participant testimonials:
“We have these beautiful landscapes right at our feet that need protected - have never saw Northern Ireland from that perspective.”

“I learnt how we all felt so connected to the environment, through some of the interviews we learnt that we were not the only ones who felt this way.”

“Everybody needs a Philip to follow, he’s so organised!” 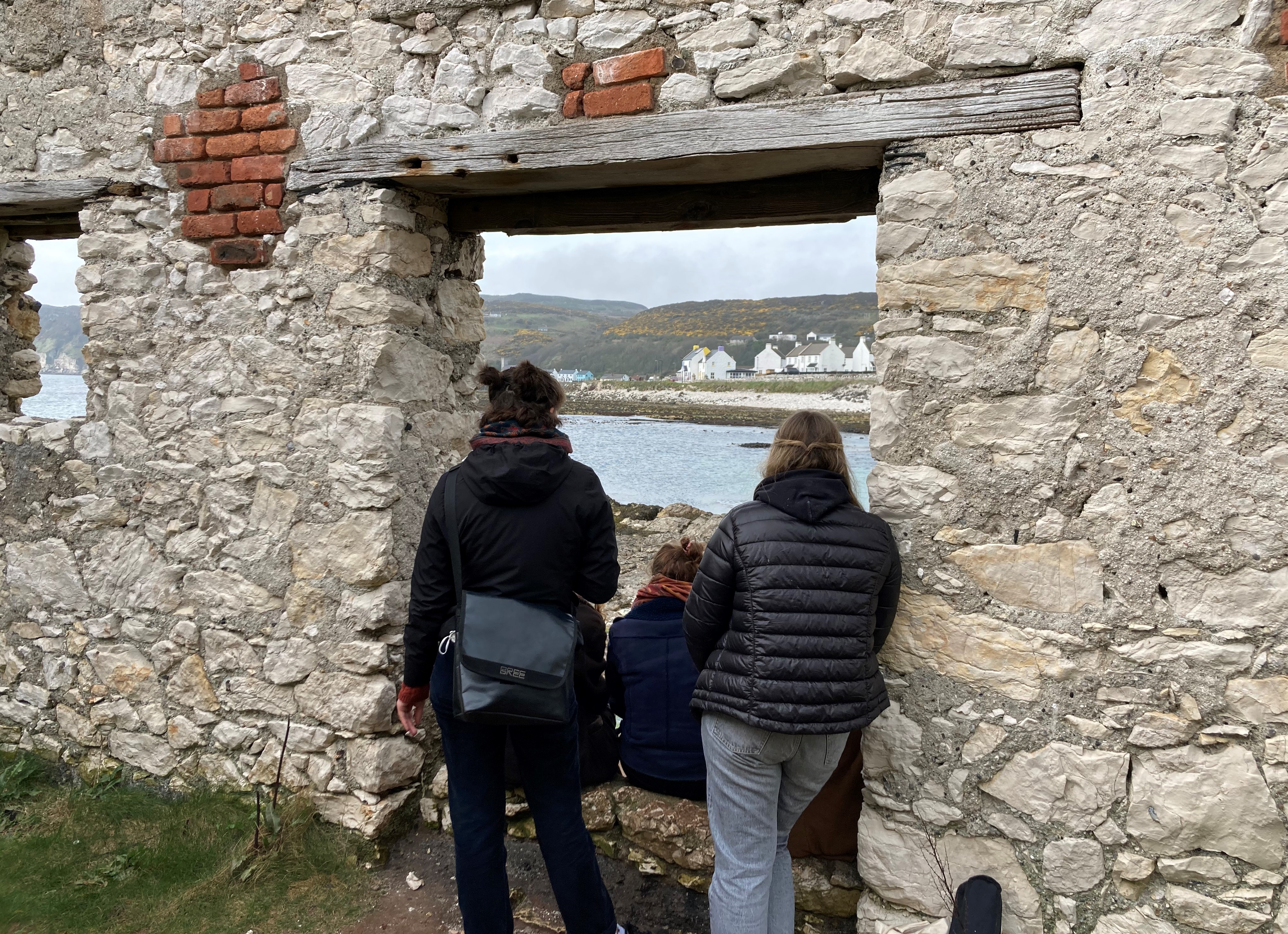 “I really loved getting to know the group. My favourite activity was the ‘one shot’ getting to split into groups and being given enough time to create something we enjoyed. We were given lots of freedom with this and we all finished with great videos. It was a good way to get to know other people from the groups personally. It was great being creative as well.”

“Spending time with people from another culture that I wouldn’t have gotten an opportunity to meet otherwise. It was really nice to see my own culture through their eyes and it gave me a new appreciation for it.”

“It feels like we’ve known each other a long time!”

“I loved spending time out and about in Germany whilst working on the project at the same time. I found that it really helped me to imagine how to best use our surroundings. I felt like I accomplished something via the making of the videos that pushed me somewhat out of my comfort zone. Completing the project mostly in the public helped improve my confidence and also seeing something new about the world around me.”

“I loved my visit to Germany, which was my first time there. I loved seeing the differences from Northern Ireland, it was great seeing the big cities and the nature. We got a better sense of the culture talking to the other participants who lived there.”

“This was such a worthwhile experience, I really appreciate all the energy that went into making it as good as it was. Thanks for everything!” 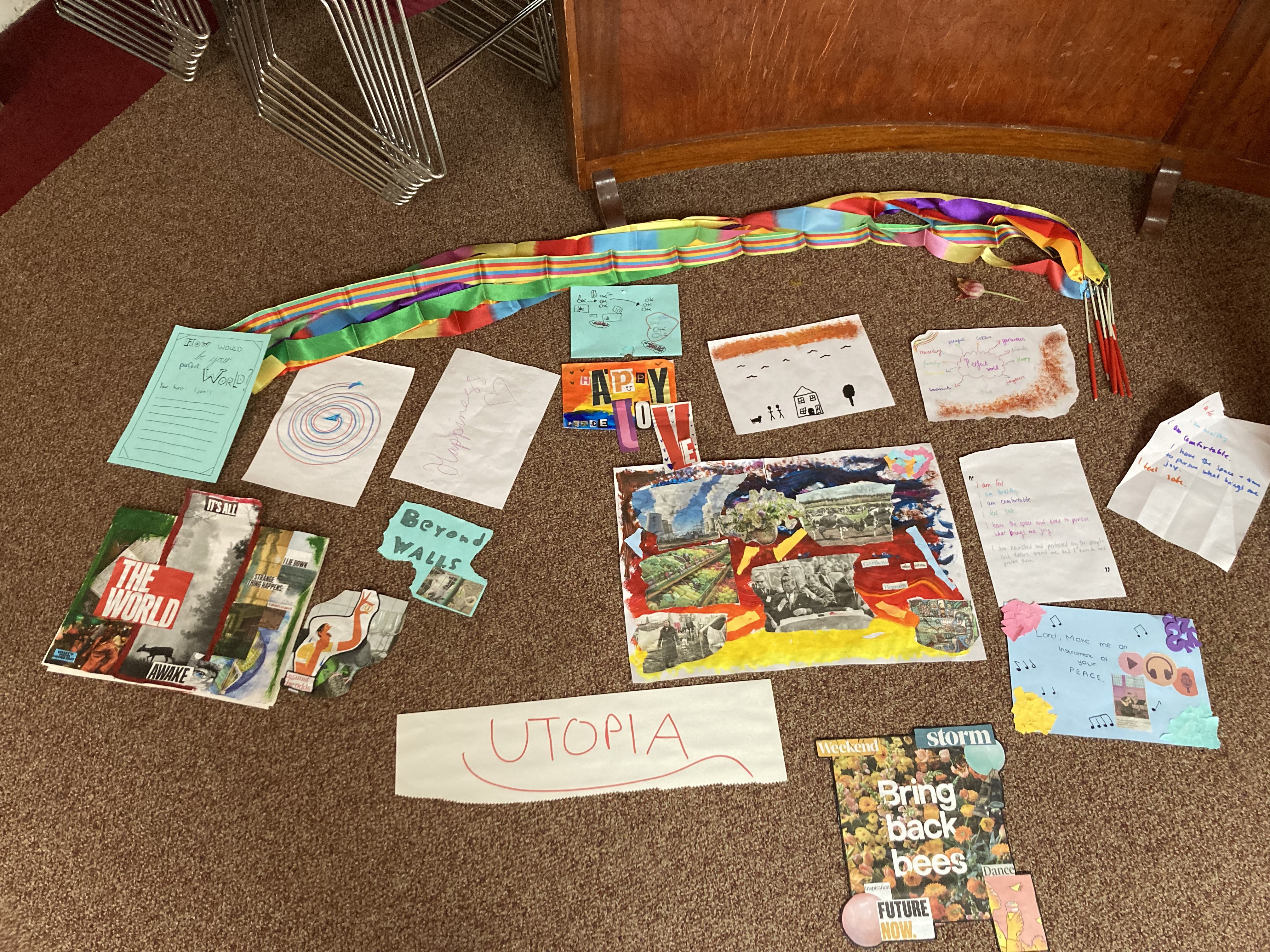 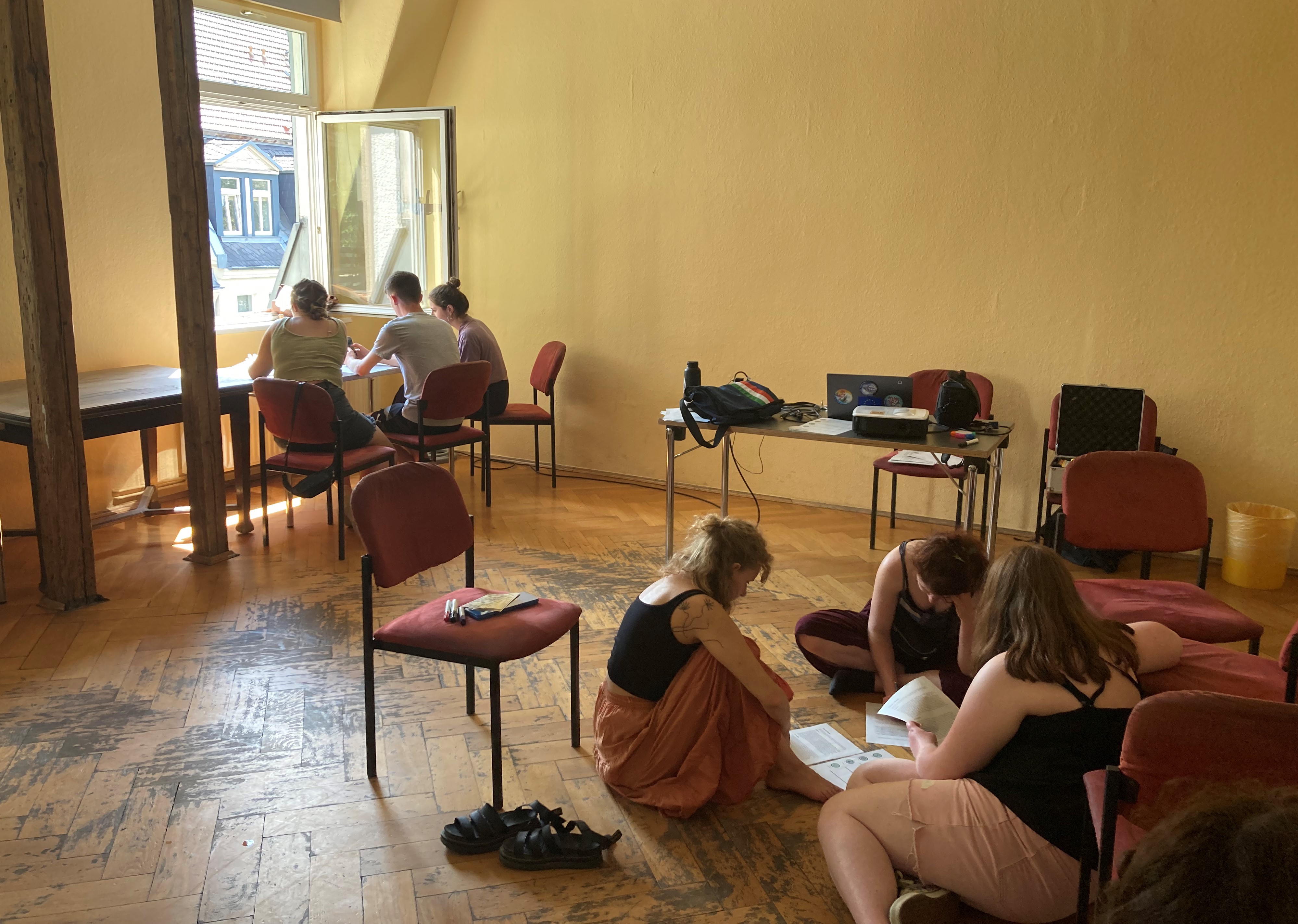 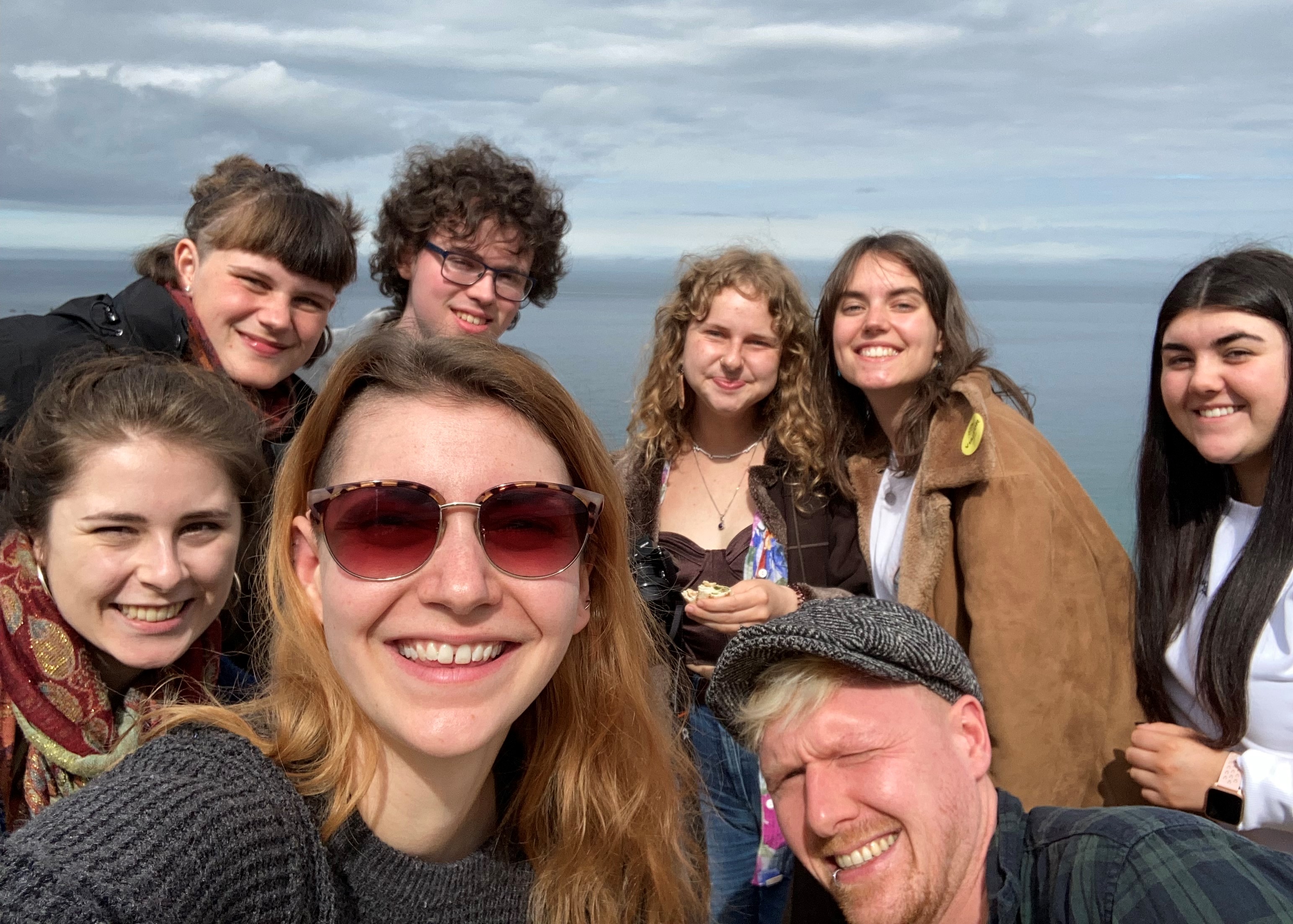