Past & Present: The 'Troubles' in Northern Ireland

Every global conflict has its own peculiar context; perhaps colonisation, conquest, revolution, ethnicity, hate, fear or domination ignite the flames. Northern Ireland's main context lays in the constitutional status of the state and the historical emergence of the divide within the two main communities; the Protestants and Catholics. However the conflict in Northern Ireland has political and religious roots that are centuries old. In modern times the conflict has focused on opposing views of the state's position. Since the 12th Century continuant revolts challenged British rule of Ireland. In the early 17th Century during the 'plantation of Ulster' the Scottish and English settlers, who moved to the north-east of Ireland to take ownership of confiscated lands, were Protestant and had strong cultural ties with England and Scotland. The native Irish who were forced from their land were Catholic and culturally Irish. Although religion was not the determining factor in the conflict between the people living in the region, it has a special significance as it was used as a marker to distinguish and discriminate between sections of the community. As a consequence of the plantation Protestants acquired land and wealth. Various pieces of legislation were introduced to reduce the status of Catholics. The goal of the unionist and overwhelmingly Protestant majority was to remain part of the United Kingdom. 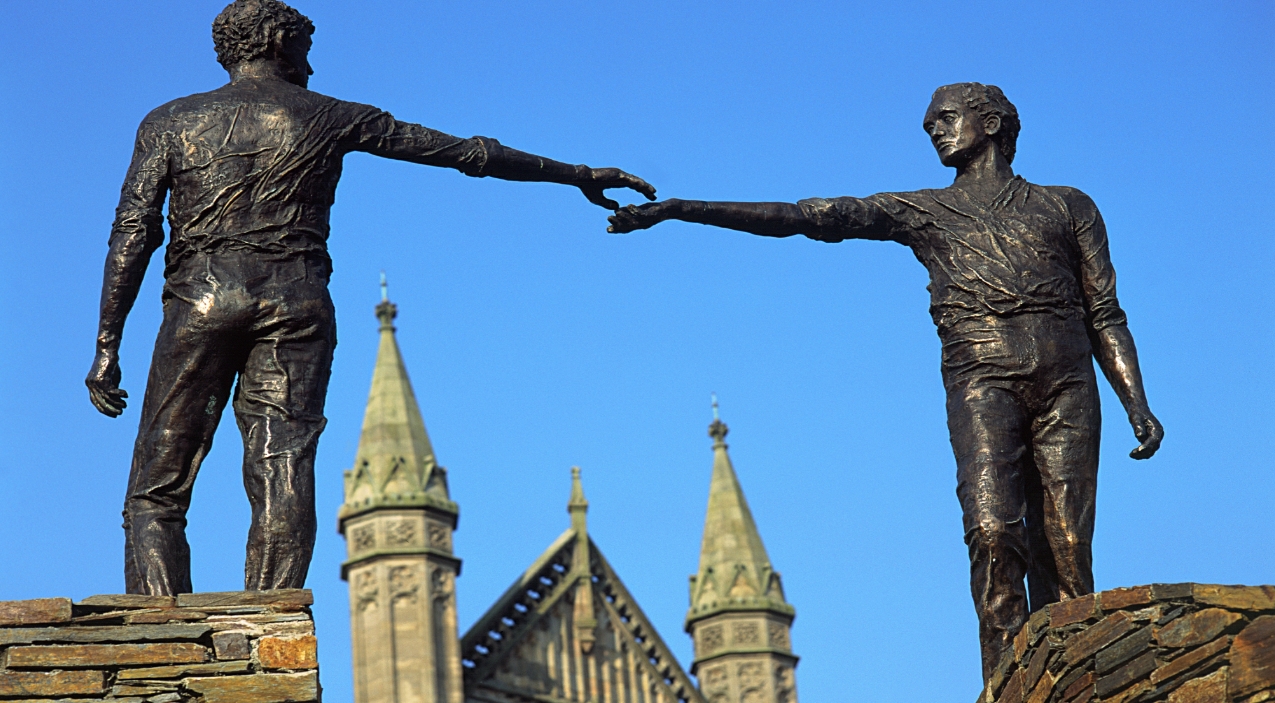 The goal of the nationalist and republican, almost exclusively Catholic, minority was to become part of the Republic of Ireland. Initially this was a territorial conflict, not a religious one. At its heart lay two mutually exclusive visions of national identity and national allegiances. The conflict climaxed in the 1916 Easter Uprising in Dublin. This sparked a chain of events leading to civil war and eventual partition of the island in 1921. Throughout the 1920's to 1950's failed attempts at insurrection. The inequalities between the two sections of the population persisted to the late 1960s and were the main cause of the civil rights movement that eventually led to the re-emergence of violent conflict. What the locals call the 'Troubles' refers to a violent thirty-year conflict framed by a civil rights march on the 5th October 1968 and the  Good Friday Agreement on 10 April 1998. In the years between over 3,600 people were killed and 50,000 more injured.

During a period of 30 years, many acts of violence were carried out by paramilitary and the security forces. From pitched street riots and gun battles to car bombs, the evolution of these methods of violence greatly influenced the tactics and impact of the conflict. Once the Troubles took hold Protestants and Catholics simply could not co-exist as previously mixed areas became exclusively segregated. As a direct result of this increasing conflict in Northern Ireland saw the biggest population movement in Europe since the Second World War as the two communities separated. It became evident that working class unable to coexist in communities. Many people's political opinions were set in stone from this time on - a "them and us" mindset which many still believe exists to this day. This is evidence in Belfast as the city is dissected with 110 walls separating once battling communities from each other as fear, suspicion and segregation still play an active role in the community psyche. One of the great unsaid truths of the Troubles is that it was a working class war with the brunt of the conflict effecting religious aligned ghettos. The leafy middle class suburbs of Belfast and other cities remained relatively untouched by the worst of it all. In many of these communities, law and order ceased to exist. The police were largely distrusted. Justice, such as it was, was handed out by the various paramilitaries. This vigilantism was often extremely brutal, with victims being kneecapped (shot in the knees), expelled, beaten or tarred and feathered.

Throughout the Troubles people were killed where they lived, socialised or worked. They were killed innocently walked or strayed, at sporting events, in hospitals, in prison, leaving churches and even inside places of worship. The violence of the Troubles continues to impact upon communities even today. Beyond the dead many are traumatised and carry the scars to this day. Tens of thousands served in the security forces, joined the paramilitaries and went to prison.

More witnessed the horror of violent death. By the late 1980s, the leaders of republican and loyalist paramilitaries were reconsidering their strategies. The IRA's political wing, Sinn Féin, had undergone significant adjustment and was contesting elections as part of a two-pronged republican strategy embracing both "the armalite and the ballot box". The new-found electoral successes for Sinn Féin was, however, continually stunted by IRA violence as the majority of nationalist votes remained with the non-violent Social Democratic and Labour Party (SDLP). In the background secret talks were taking place to bring the conflict to an end. In August 1994, to the amazement of many, the IRA called a ceasefire. Loyalist paramilitary groups - the Ulster Defence Association (UDA) and the Ulster Volunteer Force (UVF) - followed suit in October of that year. This period gave the space required for all parties to engage in intensive talks with the support of the Irish, American and British Governments and eventually forging a pathway to peace. In April 1998, the Good Friday Agreement was signed. An overpowering desire for peace across the political community, combined with a disposition to compromise, saw the creation of self-government to Northern Ireland through the adoption of a power-sharing Executive and local Assembly.

The political institutions set out in the Good Friday Agreement still stand but have been stalled during various spells of interruption; including now. But as a direct result of the events of Easter 1998, a fragile peace still holds in Northern Ireland. There have been many outbreaks of violent conflict in the past and there is no absolute guarantee that people will not resort to overt hostility in the future. In the meantime, Northern Ireland is likely to continue to experience an imperfect peace. It will require a fundamental shift in the nature of the relationship between unionists and nationalists in the region for violence to be avoided in the future.

How does Northern Ireland's government work?

• Northern Ireland has a power-sharing government, in which Irish nationalists and unionists must work together.

• The system was set up to provide a political settlement after years of conflict. A first
minister and a deputy first minister are appointed to lead an Executive Committee of Ministers.

• In the current Stormont Executive, the Democratic Unionist Party has six ministers and Sinn Féin has five. An independent unionist holds the justice ministry.

• Westminster has delegated powers to Stormont which cover most areas of government.

• The executive has responsibility for healthcare, education, transport, policing, justice, agriculture, economic matters and many other issues.

• The first and deputy first ministers lead the executive. Although they have different titles, they basically have equal authority and cannot work in isolation from each other.

The Collapse of Northern Ireland Executive in January 2017.
Since January 2017 there has been no functioning Government in Northern Ireland. This has had a massive impact on all sectors of the community due to no Governing body able to agree 2017 Budgets. Education, Health & Community sectors have been affected the most.
So what happened?
• Martin McGuinness resigned as deputy first minister following a row between Sinn Féin and the DUP over a green energy scheme. The DUP leader, Arlene Foster, was the minister in charge of the Renewable Heat Incentive (RHI) when it was set up in 2012. The scheme was designed to encourage businesses to switch from fossil fuels to more environmentally friendly energy sources. But subsidies were overly generous and initially there was no cap on the payments.The scheme is projected to run £490m over budget, although the DUP say they have a plan to eliminate the overspend.
• Mr McGuinness quit after Mrs Foster rejected his calls for her to temporarily stand aside as first minister while an investigation was carried out.
The RHI scandal?
• The RHI (Renewable Heating Scheme) scandal has caused the most public rift between the parties.
• Martin McGuinness referred to other issues in his resignation letter. There are many disagreements between the parties.
• On Brexit, the DUP wanted the UK to leave the EU - Sinn Féin took the opposite position.
• Sinn Féin wants to legalise same-sex marriage in Northern Ireland, but the DUP does not.
• Just before Christmas 2016, a DUP minister withdrew funding for an Irish language bursary scheme, in a move which angered nationalist parties.

Post Martin McGuiness era and protocol
• Martin McGuinness's resignation as deputy first minister automatically put Arlene Foster out of her job as first minister, because they hold a joint office.
• After the positions have been vacant for seven days, the administration is effectively dead and the law says the Northern Ireland secretary must call a new election after a "reasonable" time period.  Sinn Féin has made it clear it will not re-nominate anyone to become deputy first minister.
• In March 2017 Martin  McGuinness died of illness.
• Michelle O’Neill became leader of Sinn Fein and an election was held in June 2017 with DUP and Sinn Féin getting majority votes.
• Since the elections both parties have failed to agree on a number of issues that would restore NI Executive and devolved powers. The Irish Language Act,  LGBT marriage, the border post Brexit are amongst the sticking points of disagreements.
• In UK elections Conservative party lead by Theresa May formed a coalition with DUP to make up majority votes to stay in power. This included a £1 Billion pound investment for Northern Ireland. This money will not be released until NI Executive is back up and running.
• NI Executive remains non functional
• Currently senior civil servants in London are trying to manage Northern Ireland affairs and budget.

The political crisis is affecting many areas of life.
• A Stormont plan to tackle hospital waiting lists cannot go ahead without an Executive.
• The uncertainty over who will be making government decisions in a few weeks' time is causing concern among public sector workers.
• And business leaders are worried the instability could affect overseas investment.
• There is a question mark over who will speak for Northern Ireland as the UK begins the process of leaving the EU.
• While there has been a degree of public indifference to previous crisis situations at Stormont - the impending collapse of the executive is generating lots unpresedented unease.

At the time of this update (15 June 2019), Northern Ireland is still without a functioning Government.