Raising awareness and fundraising for Musicians at risk in Afghanistan and displaced are a series of many concerts in various countries as part of the Campaign to Protect Afghan Musicians led by ICFAM (International Campaign for Afghan Musicians) and partners. 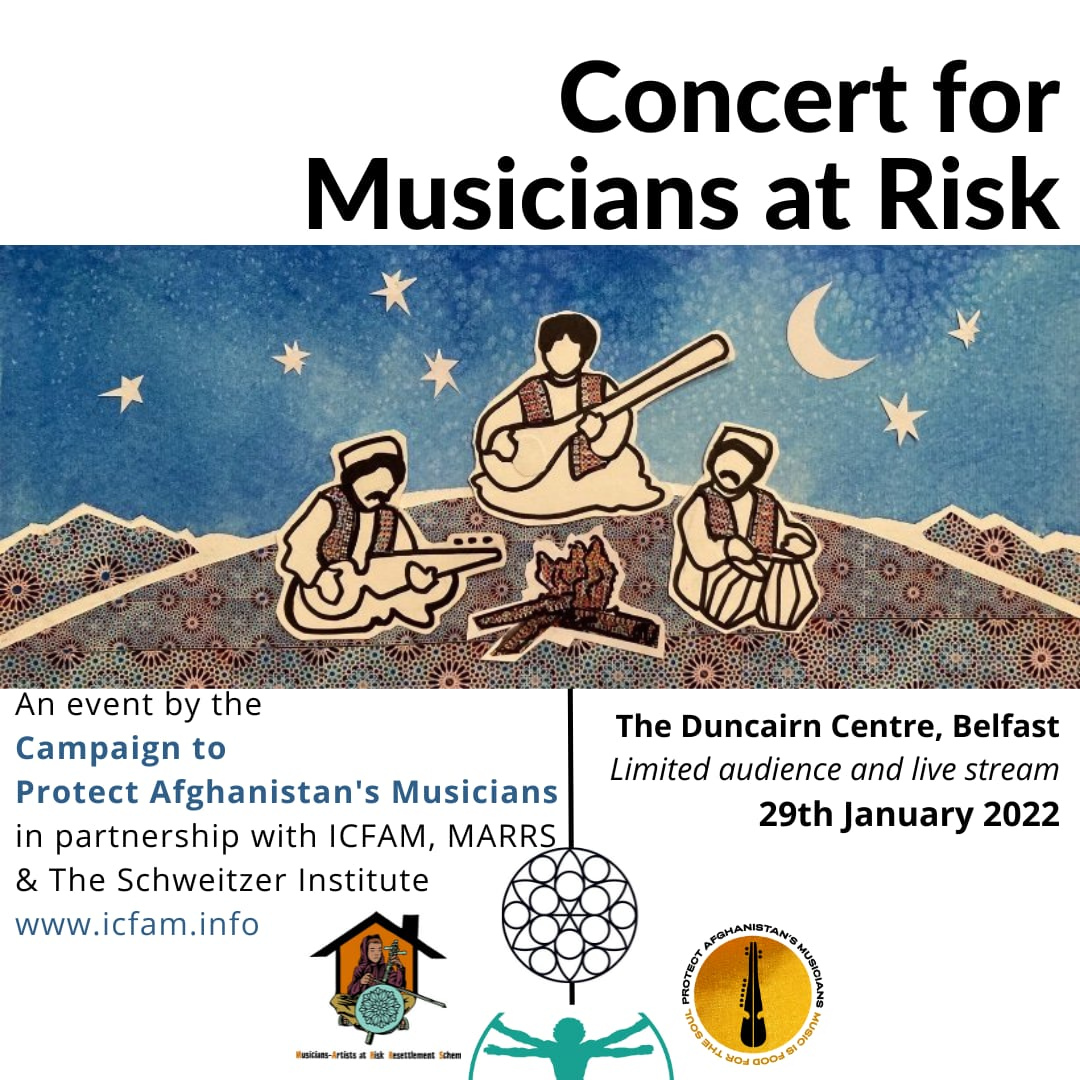 "I grew up in an area of Kabul called Kharabat. It was next to the palace of the king, who built the neighbourhood 200 years ago for the musicians who used to perform in his palace. All the musicians and people involved in the music industries -- dancing and everything -- lived in Kharabat. It was very famous all over Afghanistan. Everybody looked forward to going one day to visit the place where all these respected musicians and dancers lived. They used to hear them on the radio and see them on the TV, but they wanted to go and meet them personally in a coffee shop. Wherever we go the people ask 'Can you sing Tchun Djaney Kharabat.' That means my heart becomes as Kharabat. Kharabat has two meanings: one is this neighbourhood called Kharabat. But the real meaning, in Sufiism, is somewhere where you can go and have some peace for your soul and some happiness for your heart. You can just go and leave all the world behind - you are the king of yourself. They believe, in Sufiism, that we are a drip of water which has been separated from the sea. But once it gets back to the sea it's not that drip any more -- it becomes the sea. So they believe that we are a drip of water from God. Once we die, we get back to that sea, and we are God. We go back to God. I still have the spirit of Kharabat in London. The family of musicians is a universal family all over the world, and within this family I always find Kharabat. Wherever I find musicians, Kharabat is there.

Probably best known as one quarter of Dublin group Lankum, Daragh Lynch has been involved in a number of musical, artistic and political projects in Ireland since the early 2000s. As well as providing illustrations and angry rants for underground newspaper Rabble and involvement in a number of Dublin’s cultural hubs throughout the 2000s and 2010s (The Hendron Building Studios, The Karate Klub), he has played in various punk, metal and shock-rock cabaret outfits. Over the years, Daragh has been involved in a number of endeavours to highlight and support the struggle of refugees and asylum seekers in Ireland and abroad, through street protests, benefit concerts, and raising awareness on television appearances and through publications like Rabble. More recently he has been involved with the Bohemian Football Club annual Direct Provision Xmas Drive, which provides presents and clothes to every DP centre in the country. The pandemic has provided Daragh with a welcome break from extensive touring, and the time to pursue other creative projects - a collaborative project with Scottish singer Iona Zajac, developing his songwriting skills, exploring psychedelic sonic landscapes and sanding his floorboards.

Iona Zajac is an Edinburgh born singer and multi-instrumentalist. Her roots come from the traditional Scottish music scene, while her songs speak of the everyday. She moved to Dublin in June where she has been recording, writing and performing - reimagining traditional Scottish and Irish songs as darkened musical landscapes, and composing her own original songs. What both of these strands of her work share is a love of stories, and music’s unique ability to tell them in extraordinary ways. Iona spent time in 2017 volunteering with BelgrAid, a volunteer-run charity in Serbia, providing nutritious meals for refugees and asylum-seekers at a local camp. She did a lot of writing following that time, and wrote ‘Lend Your Garden’ the title track from the debut album of her former band, Avocet. The song is centred around the firm belief that by ‘lending your garden, it will blossom further. “I am a firm believer in the equal treatment of all people and find it hard to wrap my head around the fact that equality is not the reality for so many. In December 2021 I helped with the Christmas appeal for families in DP. People were so generous and the effort was brilliant, but this should not have to exist in the first place. I am currently helping a close friend with her asylum process in Scotland, writing letters of support for lawyers, and supporting her and her 2-year-old in whatever way I can. She was forced to leave home for fear of her life, and yet 4 years later the Home Office haven’t seen sufficient evidence to grant asylum. This is the case for so many and it is inconceivable to me.”