Young musicians in Afghanistan & Northern Ireland have united to produce a music video based on a popular Afghan song ‘In Gham-e-be Haya’ meaning Audacious Sorrow composed by Ustad Salim Sarmast. This collaboration focuses on the International Women’s Day 2021 theme ‘Choose to Challenge’ and uses music to challenge the recent statement issued in Afghanistan banning girls from singing in school from age 12 years upwards.

This song is the follow up to ‘Arsala Khan’ released last year and the second shared production in the trilogy as part of a social action programme building relations between young musicians in Northern Ireland & Afghan Women’s Orchestra led by Beyond Skin and Afghanistan National Institute of Music. The project is supported by WOMAD Foundation, Arts Council of Northern Ireland, Factor Law, Community Relations Council and Natali Márquez Foundation.

Anne Goldsworthy, Trustee, WOMAD Foundation said, “The WOMAD Foundation supports many projects that harness the power of music and the arts to bring about collaboration between communities and to change opinions. This outstanding project excels in these areas. That they managed to achieve this during the pandemic, speaks volumes about the commitment of all concerned and their belief in the power of music to inspire, to build bridges and to promote understanding.  It is impossible to watch their videos without being truly moved.”

Noirin McKinney, Director of Arts Development, Arts Council of Northern Ireland said, “The Arts Council of Northern Ireland is proud to support Beyond Skin with this wonderful international, musical collaboration project, thanks to National Lottery players. We know that music and the arts bring people and communities closer together and I’d like to congratulate everyone involved and encourage all to tune in and enjoy this very special piece of music.”

Only two days after the world celebrated International Women’s Day 2021 with the theme Choose to Challenge, the Ministry of Education of Afghanistan issued a statement banning  girls 12 years old and up from singing in public arenas — this would include being able to participate in singing their National Anthem of Afghanistan. This decision was immediately challenged by Dr Ahmad Sarmast – founder and director of Afghanistan National Institute of Music who launched the campaign #IAmMySong. The campaign not only set out to reverse the decision but to also to improve human rights, child rights, women’s rights, musical rights, and the universal right to freedom of expression. 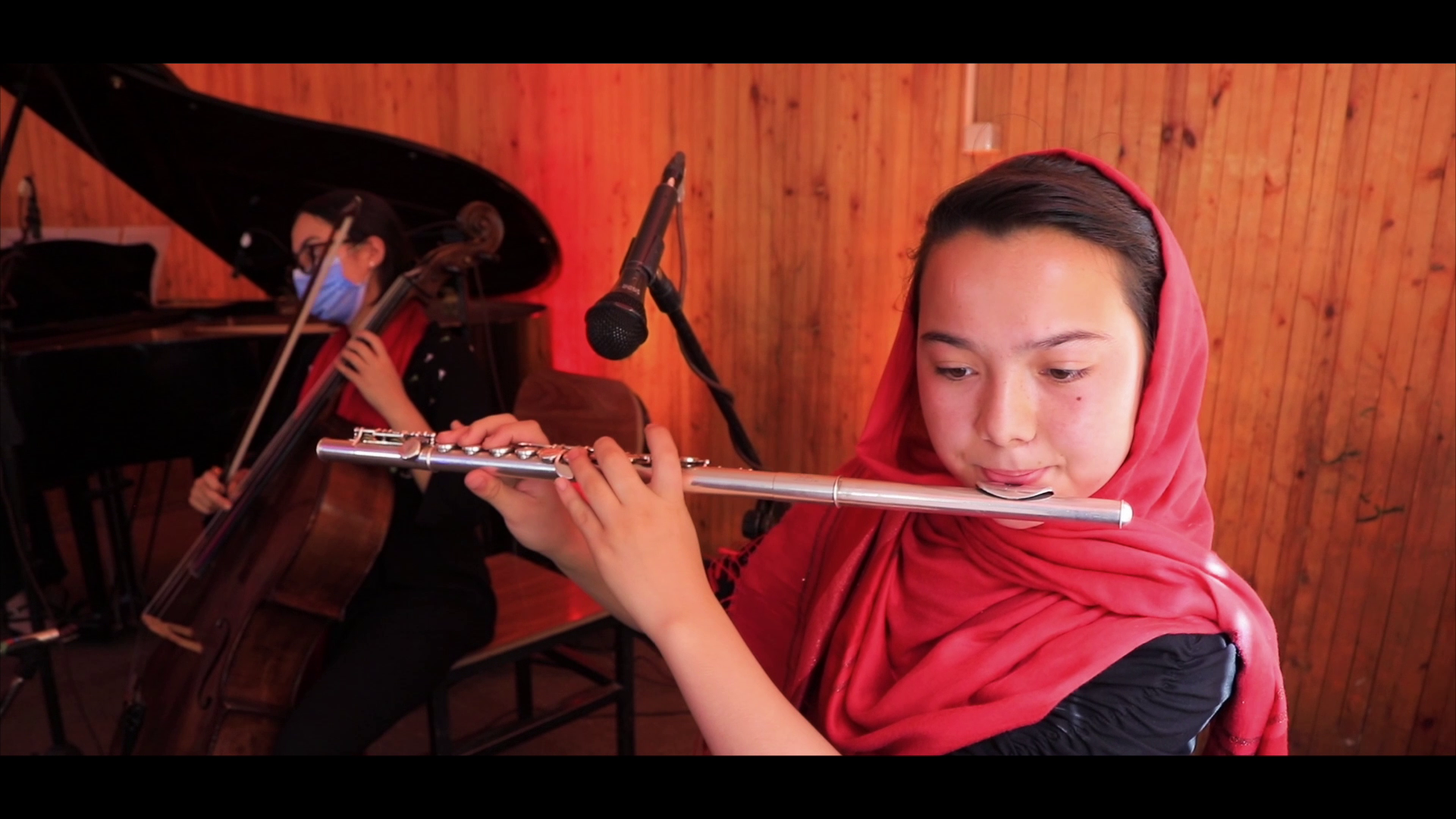 Dr Ahmad Sarmast said, “I am very pleased to see the continuation of collaboration and partnership between young musicians of Afghanistan and Northern Ireland especially in a time that there was an attempt to silence Afghan girls singing in schools. This collaboration serves as a beautiful symbol of solidarity between young musicians through singing and music making in such a difficult time.”

‘In Gham-e-be Haya’ released on 13th April 2021, features singing with passionate powerful lyrics and is very much referencing #IAmMyVoice. The song is a global anthem of equality and a call for peace adding strength to the United Nations Security Council Resolution 2250 on Youth, Peace & Security and 2030 UN Youth Strategy.

Charlotte Davidi, Comms. & Protection Coordinator at United Network of Young Peacebuilders said, “There is little more powerful than the united voice of young people from different corners of the world facing the same challenges. In this case the voice is delivered in song, as a symbolic, creative, and bold stand against attempts to silence and violate young people’s rights.”

Behind this collaboration of inspiring musicianship is a professional production, logistics and management team who together have navigated through the pandemic restrictions, production challenges and security issues to enable the collaboration to happen.

Talia Smulian - Video Producer & Recording Artist said “Being a woman in the music industry it is great to be a part of this powerful and empowering movement by young female musicians from across the world to have their voices heard”. 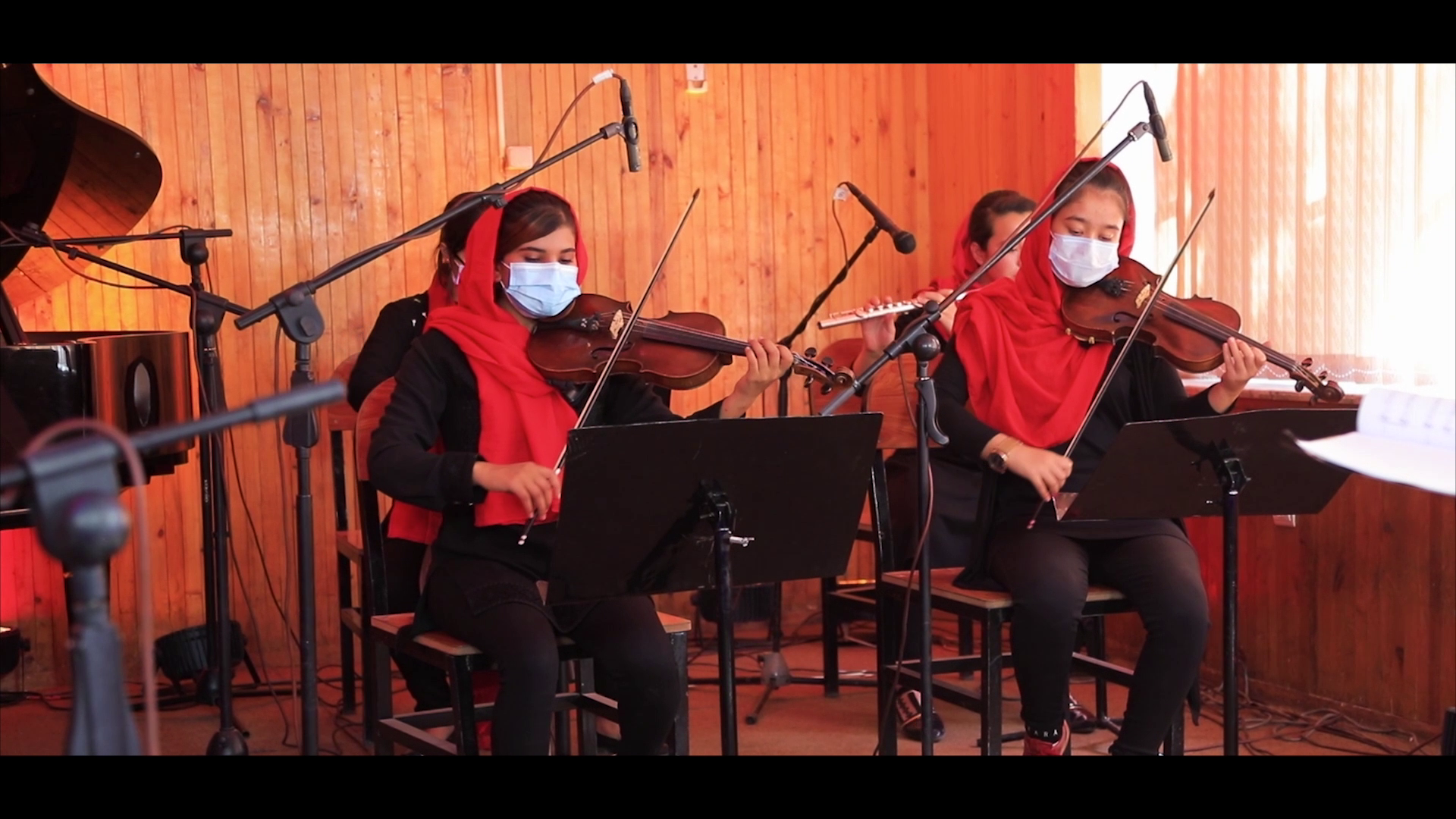 In 1996, the Taliban banned music in Afghanistan. Those found playing or selling it were imprisoned and tortured with many musicians fleeing the country. During the 30-year civil war, cultural institutions were decimated. The Afghan Women’s Orchestra (also known as Ensemble Zohra) is the first ever all – female ensemble in the history of Afghanistan.
The musicians performing on "In Gham-e-be Haya" from Afghanistan are Gulmina Khoshdil, Sevinch Majidi, Mina Karimi, Maram Abdulla, Alina Isari, Elyas Nabizada, Murtaza Khalili and Anita Alimi

Elaine O'Sullivan – Music teacher / director. Traditional Arts Partnership said, “The musicians from Traditional Arts Partnership have thoroughly enjoyed working on this second piece, "In Gham-e-be Haya". On both a musical and cultural level they have been educated and inspired and they have thoroughly enjoyed the journey with the musicians from Afghanistan so far.”

The wider vision is for members of the Afghan Women’s Orchestra to visit Northern Ireland for a series of concerts and recording sessions. Supporting partners on the programme include Unique New Adventure and Yallaa.” 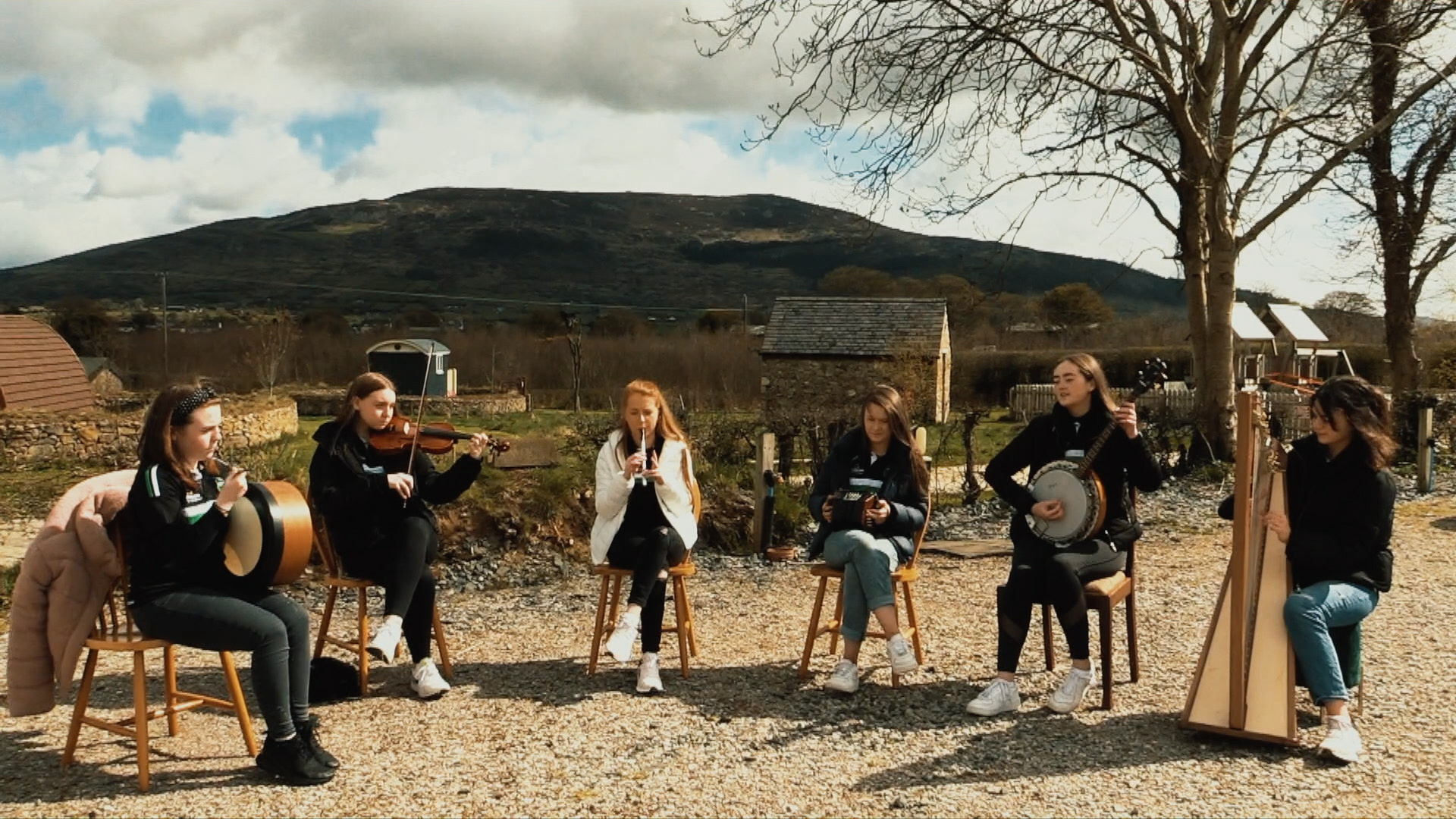 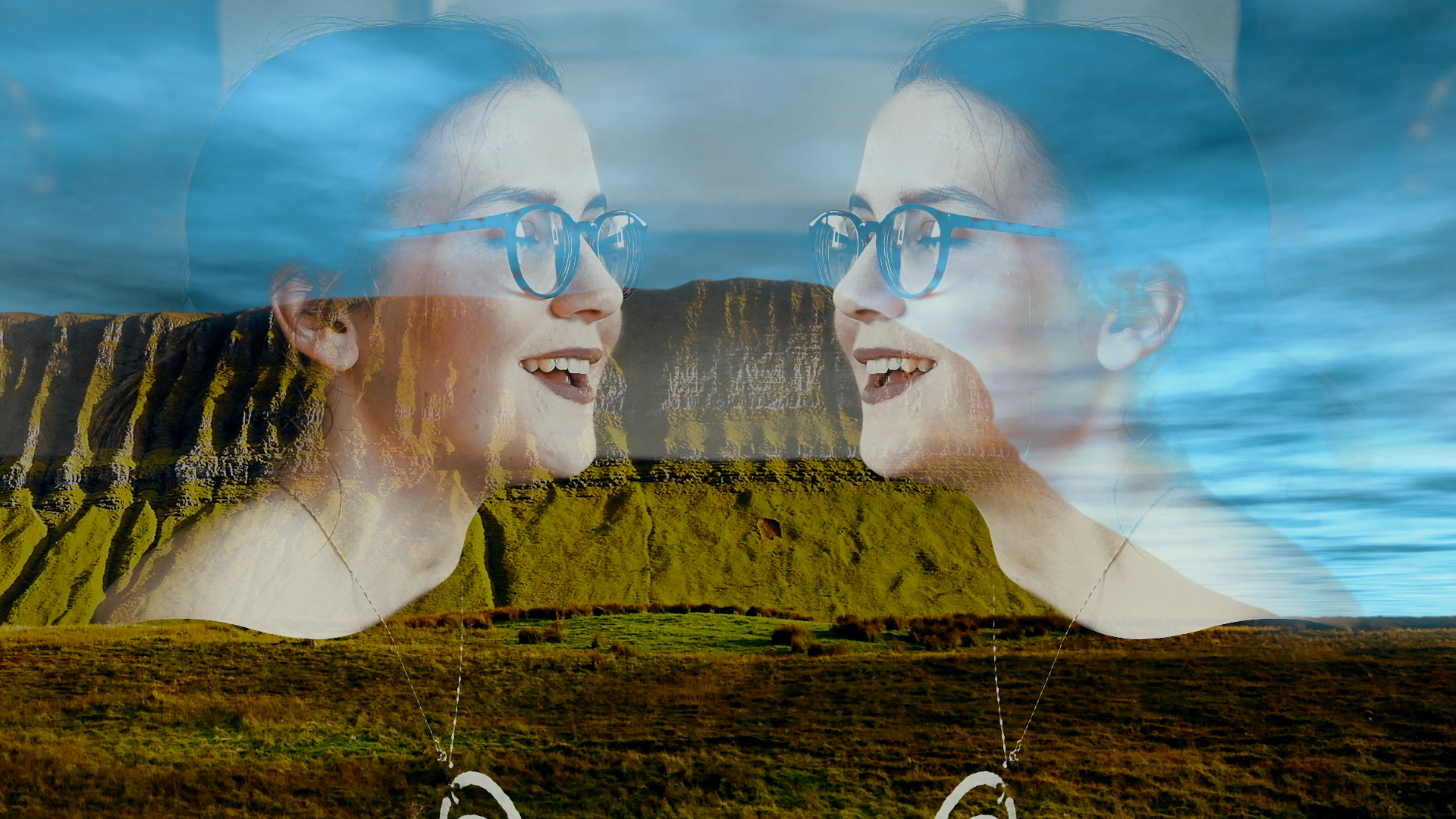 I want my freedom, I must live
When will we live at peace?
With happiness in our souls
No more taste of grief
What’s the legacy we’ll leave?
One day we will taste freedom

The voice we hold is powerful
The fingertips trace the strings of our freedom
It brings us hope
A journey to our faith
Passion we hold unites us all
When will we live at peace?
With happiness in our souls
No more taste of grief
What’s the legacy we’ll leave?
One day we’ll taste freedom 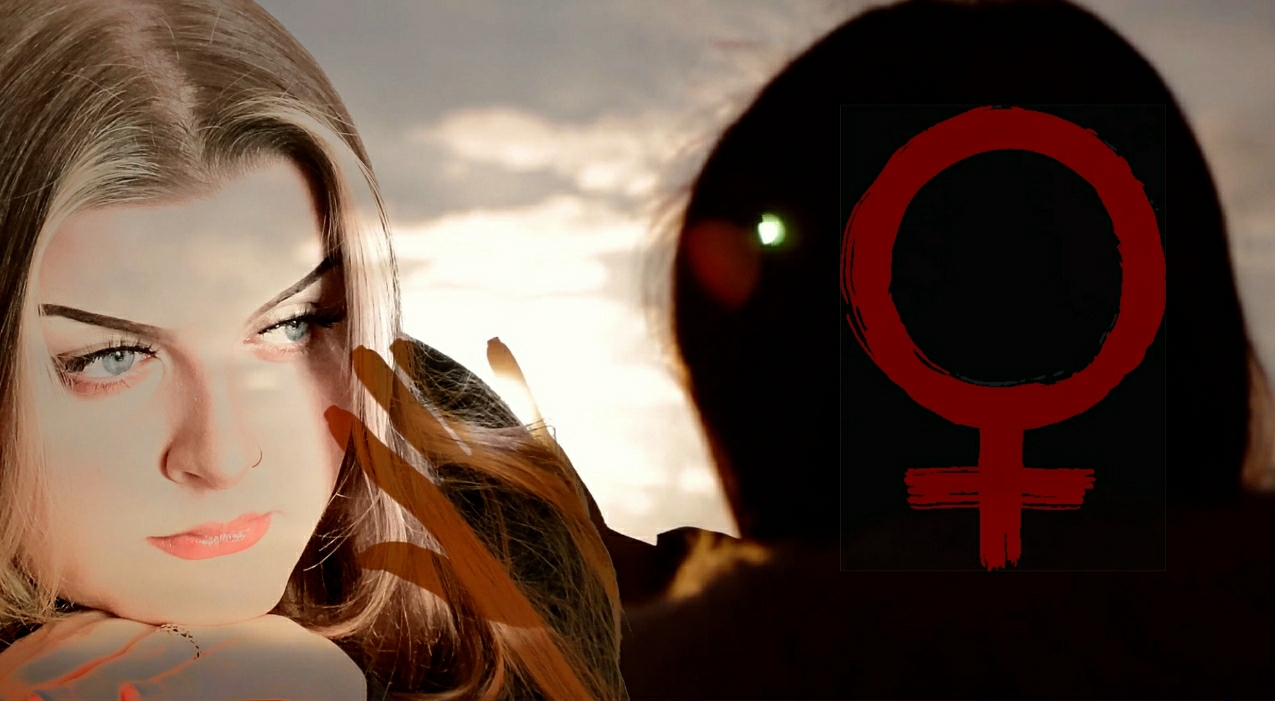