On the 24th September 2018 the United Nations Secretary-General launched a new partnership strategy with the world’s 1.8 billion young people to help put “their ideas into action”. #youth2030 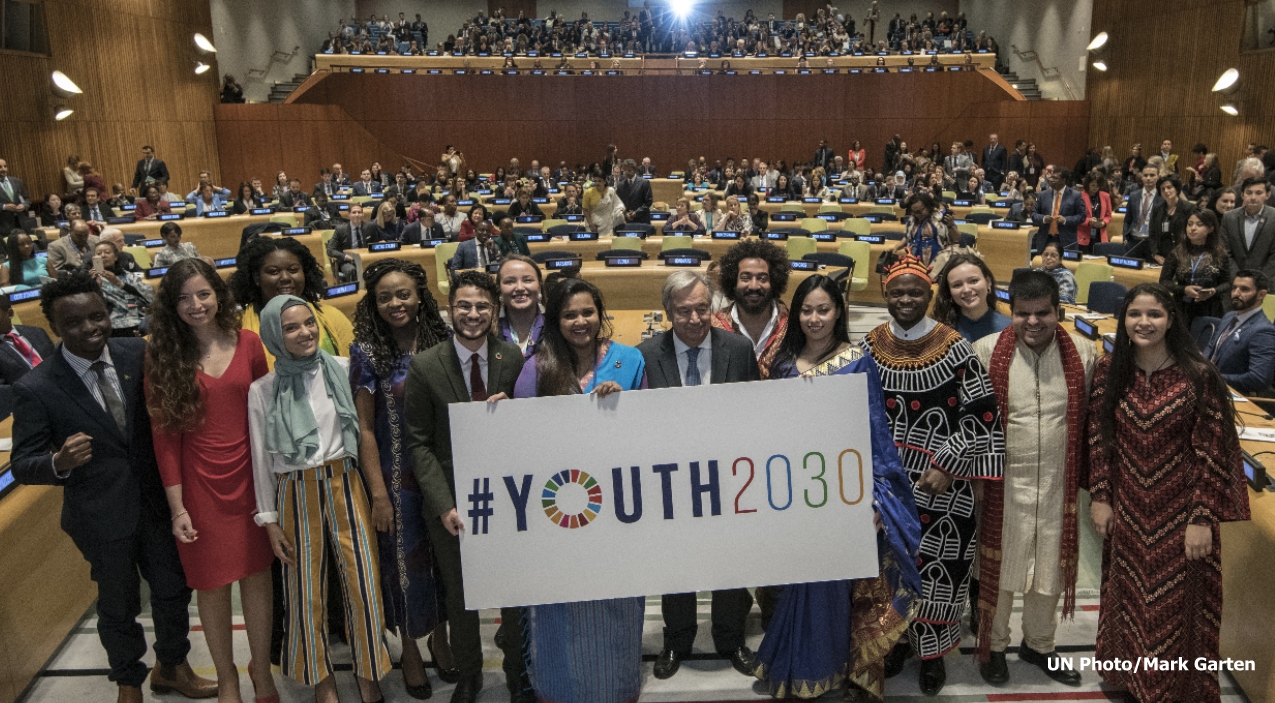 Noting that it was “a rare treat” to see so many young faces at the UN, to launch the new “Youth2030” strategy, UN chief António Guterres highlighted a list of challenges “the largest young generation in history” faces today.

He noted that “globalization, new technologies, displacement, shrinking civic space, changing labour markets and climate impacts,” were putting huge pressure on youth everywhere, adding that more than one-fifth of young people are not in employment, education or training; a quarter are affected by violence or armed conflict; and young people remain excluded from development programmes, ignored in peace negotiations and denied a voice in most international decision-making.

At the same time, he pointed out that young people were “a vast source of innovation, ideas and solutions,” who push for the needed changes in technology, climate action, inclusivity and societal justice.

“Empowering young people, supporting them, and making sure they can fulfil their potential are important ends in themselves,” he stressed. “We want this for all people, everywhere.”

Moreover, to fulfil the 2030 Agenda for Sustainable Development for a more peaceful, sustainable and prosperous world, “we need young people to lead,” he added.

In presenting Youth 2030: The United Nations Youth Strategy, he called it “the UN’s strategy to engage with, but especially to empower young people.”

Saying that the Organization has for decades worked for youth, he expressed hope that the new strategy would make the UN “a leader” in working with them, “in understanding their needs, in helping to put their ideas into action, in ensuring their views inform our processes.”

“And as we change, we will work with our partners to do likewise” and spur new partnerships, the UN chief said, identifying five key areas:

Opening new routes to involve young people and amplify their voices.
Strengthening the UN’s focus on their accessing education and health services.
Placing their economic empowerment at the fore of development strategies, with a focus on training and jobs.
Working to ensure their rights, and civic and political engagement.
Prioritizing support for young people in conflict and in humanitarian crises, including their participation in peace processes.

“Today is the start of a new era for young people at the United Nations,” he said, encouraging everyone to help move it forward. He urged Member States to invest in and empower youth nationally; challenged businesses to provide young people with skills and opportunities; and called on civil society cat speak out and keep up the pressure.

And to all youth, Mr. Guterres stressed: “Sign up. Volunteer. Vote. Be part of the solution.”

For her part, Henrietta Fore, Executive Director of the UN Children’s Fund (UNICEF) recounted that she’d often sat with young people to hear and share their ideas, enthusiasm and vision for the future.

She also listened to their worries, such as joblessness, lack of education, and violence at home and online, as well as at school and in the neighbourhoods where they live.

“And girls are worried about the discrimination and violence they face just because they’re girls,” she lamented.

In kicking off Generation Unlimited, or Gen-U, a multi-partnership initiative to ensure that all young people are in school, training or employment by 2030, Ms. Fore called on governments, businesses, foundations, academia, non-profits, communities and innovators to help with “cutting-edge solutions and new ideas.”

“Our time. Our turn. Our unlimited future,” she declared to a responsive crowd at UN Headquarters.

Noting that a “massive generation is about to inherit our world,” the UNICEF chief concluded, appealing for “a legacy of hope and opportunities for them. And most importantly, with them.”

Opening the session, Youth Envoy Jayathma Wickramanayake admitted that kicking off the youth strategy and Gen-U partnership “has not been an easy task,” but immediately shook things up by breaking protocol and inviting the young change-makers and activists in the room, to speak before the high-level officials.

Batool Alwahdani, youth speaker representing the International Federation of Medical Students Association, said that each day she reflects on her future, and thinks outside the box to problem-solve, mindful of the need to always take action.

“We volunteer in youth organizations, we create a fuss around us, and we claim our engagement platforms,” she said. “We have hopes, dreams, determination and energy,” which she flagged was “more than enough to solve the biggest problems out there.”

Speaking on behalf of those who could not attend the meeting – for example, those forced into sex work, the marginalized, hungry, uneducated, and unemployed – Ms. Alwahdani called on young people themselves to use new technology to innovate, create employment, close education gaps, defend human rights and create peaceful revolutions to help themselves.

“We know that we have the right to lead. Not only today. Not only tomorrow, but in every single moment,” she stressed, reminding all in the room that youth will be living with the consequences.
Invest in health, education

At the same time, World Bank President Jim Yong Kim, expressed his personal concern over the world his two young sons stand to inherit, with billions of others.

Referring to the successful path of his native South Korea in recent decades, Mr. Kim said: “When aspirations are met with opportunity, you get dynamic economic growth.”

He explained that because Korea invested in “health, education and all the things that are need,” he had the opportunity to become World Bank President while the Korean pop band BTS, also at the event, was able to forge a successful career in music and entertainment.

“The nature of work is changing very quickly and many, many countries are not prepared,” Mr. Kim flagged, saying that jobs will be more digitally demanding and require more perseverance and determination than ever.

Pointing out that there are 1.8 billion people between ages 15 and 30, with developing countries housing half a billion underemployed, or holding insecure jobs and that 300 million have no employment or education, he stressed “we are in a demographic change of extraordinary proportions.”

“Don’t let us decide how much we spend on health and education,” he stated, instructing youth to insist that enough is spent so that everyone can become whatever they want.

Beyond Skin are leading the #youth4peace programme in Northern Ireland as a member of United Netwrowk of Young Peacbuilders (UNOY). One of our peace ambassadors, Andrea Walker is also an active member of the European Youth Advocacy team (E-YAT), an international group of young peacebuilders working together to strenghten youth particpation in European policy and practice.